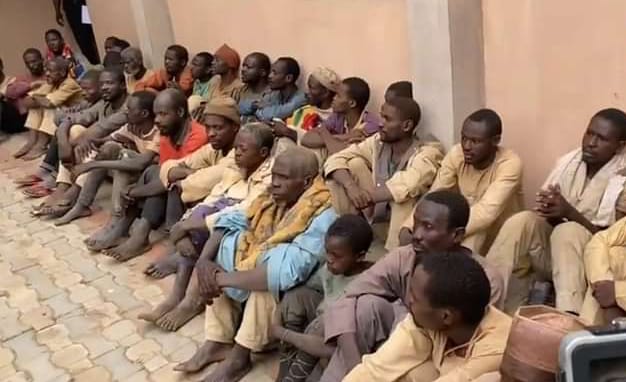 A joint tactical operations of the Zamfara State Police command has announced the rescue of 97 kidnapped victims, including 7 pregnant women from Shinkafi and Tsafe local government areas.

Addressing newsmen on Tuesday at the command headquarters in Gusau, the Zamfara State police commissioner CP Ayuba Elkana said police,military and other security agencies are carrying out extensive operations at various bandits enclaves in the State.

“The operations have resulted to series of arrest of notorious bandits, recovery of sophisticated arms,ammunition and rescued kidnapped victims”.

According to him,all the rescued victims were released unconditionally and arrived police headquarters in Gusau on Tuesday in the State.

“Following an extensive pressure mounted as a result of the ongoing military operation around the camp of a notorious bandits kingpin known as Turji,on 3rd of January 2022,police tactical operatives deployed at Shinkafi axis received an intelligence report that some kidnapped victims were seen stranded in the bush”.

“The police in collaboration with genuine repentant bandits and vigilantes swung into action and rescued sixty eight (68) victims from the forest”.

He revealed that the kidnapped victims were in the captivity for over three months ,”33 Male adults, 7 Male Children 3 female Children and 25 Women including nursing mothers.”

CP Ayuba disclosed that those rescued were from Magarya,Maradun, Gusau in Zamfara State and Sabon Birni local government of sokoto State.

He said the victims were abducted for over 60days from villages that included Adarawa,Gana and bayawuri in Rijiya District of Gusau local government area in the State.

He maintained that all the victims are currently receiving medical treatment from the joint medical teams of the State government and police in the State.

“They will be debriefed, hand over to the State government before being reunited with their families”.