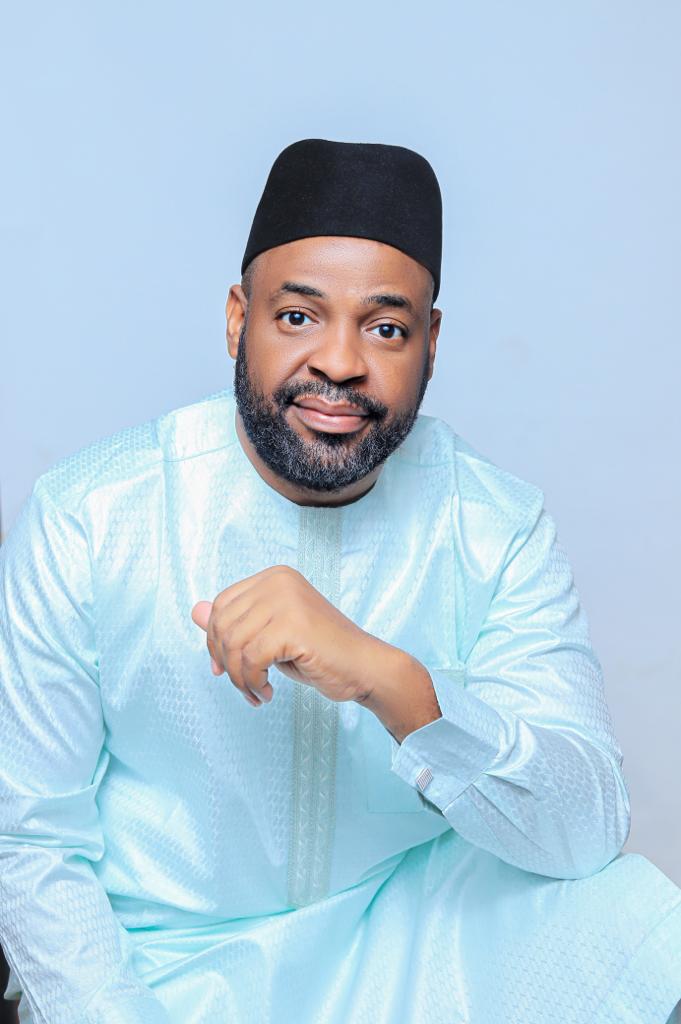 On a beautiful day of Tuesday the 22nd of March 2022 a committee of friends, family members and indeed well-wishers stormed the National Headquarters of the Peoples Democratic Party (PDP) WADATA PLAZA Abuja to pick a nomination form for the post of Governor of Zamfara state for Malam Abubakar Muhammad Nakwada.

As unique as the event, the nominee was neither at the party headquarters himself nor was the activity conducted with his full mandate like we have witnessed with other aspiring contenders. In the case of Malam Abubakar Nakwada, it was concerned stakeholders of Zamfara and indeed people of repute that saw the need and beckoned on him to answer the call to serve.

They pooled resources together and purchased the form and also took care of all the logistic needs of those that came all the way from Zamfara to make sure that the aspiration is fulfilled. Dozens of well-wishers who do not have money were transported and lodged in a very conducive hotel accommodation in Abuja.

In the evening hours of same Tuesday the man of the event Malam Abu Nakwada was invited at the conference hall of Ekiti Hotel were an interface was organized between him and all the concerned stakeholders. Speeches were made and positive testimonies were given about the competency and capacity of Abubakar Nakwada. 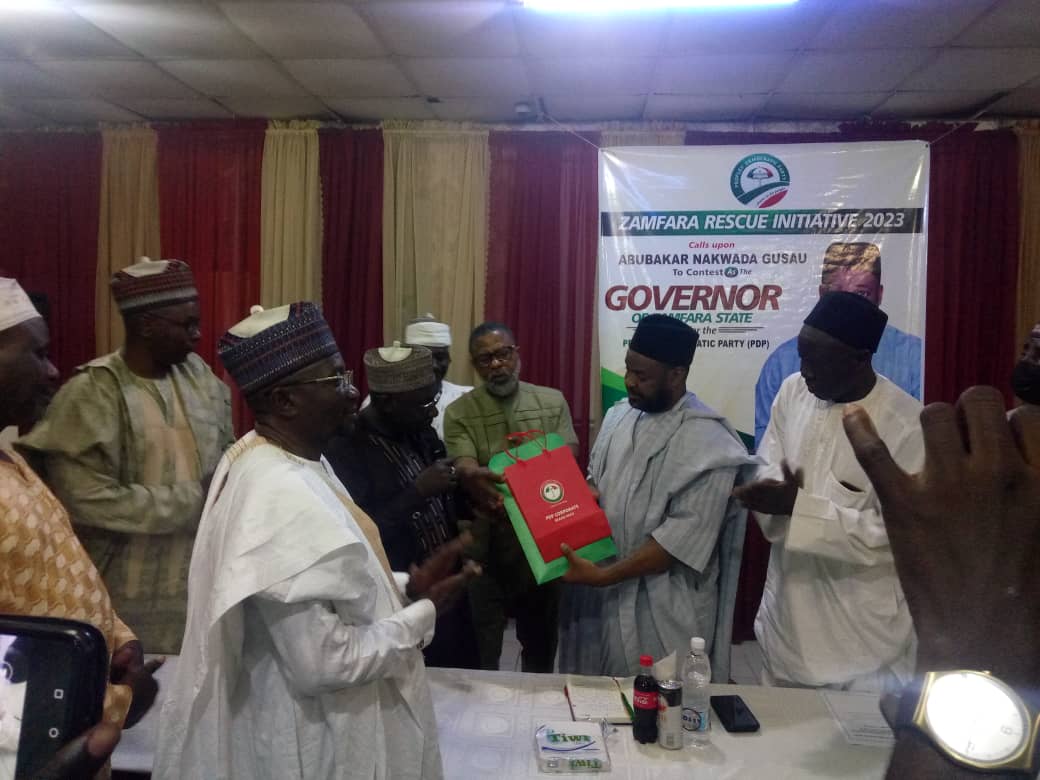 One of the elderly statesmen who spoke at the event (Rtd) Commandant of NSCDC Muhammad Bello Musa said, their concern for the socio-economic and political crises hitting the state coupled with the non-directional leadership at the control center in Zamfara influenced them to go for search of competent and energetic candidate whose experiences and passion for change could be used as the parameter for the commencement of new political crusade in Zamfara state.

He said, one thing he is sure of about Abubakar Nakwada is the type of discipline and orientation he has received from his father Alh Muhammad Nakwada who is well-known and respected elderly statesman not only in Zamfara but in those states that made up of the old Sokoto State. He added that, as someone who joined the Federal Civil Service and rose through the rank to become a Director, he will no doubt do better than many of those dreaming to become Governors of Zamfara State.

“we have measured our options and sampled the opinions of those that matters in Zamfara state and we believed out of the dozens that were brought as an option, Abu Nakwada excels in terms of many indicators. We have developed a road map which we have asked him to study and we are optimistic that if he made up his mind accept the new role, together a very good beginning is coming for Zamfara state”

Rtd Commandant Muhammad Bello further stated “we have prioritized in our road map, the idea of reviving education, strengthening job creation through strong emphasis on private sector participation, security and agriculture. These strong sectors which are in comatose and in a state of shamble in Zamfara state are going to be the core-pillars that we shall together set as the agenda for Abu Malam Abubakar Nakwada. Like I said, his capacity is not in doubt and also we shall stand by him in making sure that the right thing is done and we assure the good people of the State that Abu Nakwada shall surely make a difference”. 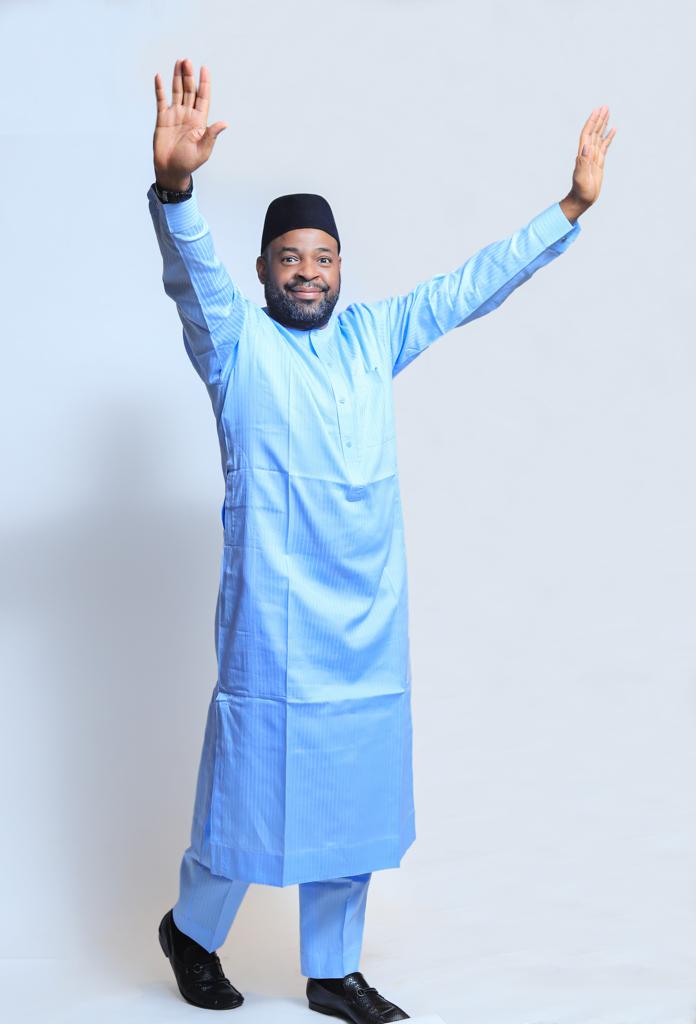 Another speaker in person of Aminu Lawal Koramar Boko, said the choice of the candidature of Abu Nakwada is to simply to probe a new political hypothesis that there can be a political success in Zamfara without really having a god-father. He said many may wonder when competent person like Abubakar Nakwada was finger-pointed for the governorship race, it was decided that it should be in the PDP and the reason is simply to try to probe the many theories that Zamfara people in 2023 would be much more willing to go for candidate with competent record than the political umbrella he belongs to or the god-father that fixed him for the race.

He added “typical Zamfara person does not need to be reminded that education is in comatose, agricultural activities stagnated, commercial and economic activities have crashed and insecurity is the major concern of all. Typical Zamfara person does not also need to be told that, bad leadership is the basis of these crises and unless the right person like Abu Nakwada is brought on board to take the lead in the rescue mission, the state would finally crash to its knees”.

“Abu Nakwada will by the grace of God almighty emerge victorious in the 2023 Governorship race if the people are truly yearning for the better. He did not push for this aspiration but people beckoned on him into accepting the challenge and for sure their good-will shall manifest to real victory not at the level of internal party primaries of the PDP alone but the general election as a whole”. 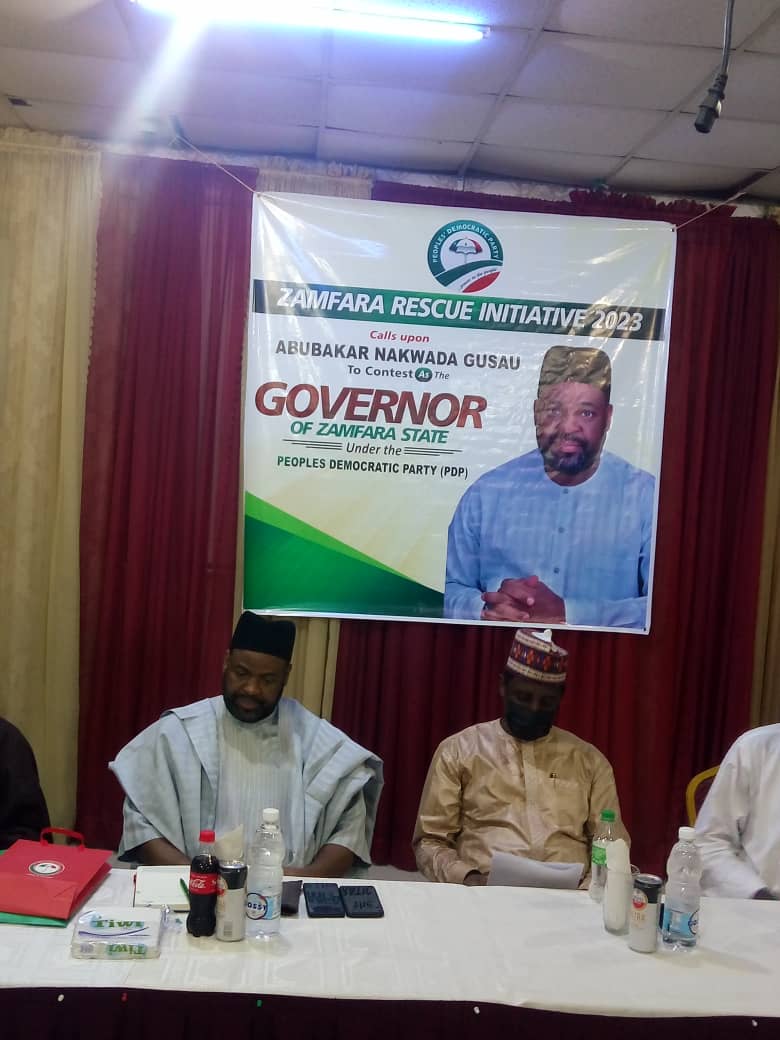 Another speaker Alh Lawali Wakkala Kaura said, “I have been in the political mainstream since 1999 and believe me we have never had a sense of direction in terms of picking candidate that is both capable and experienced than now. I am conversant with the procedures of how Governorship candidates are picked in Zamfara since 1999 both in the then APP, ANPP, APC and in the PDP and believe me the process through which Abu Nakwada was identified and approached to take over the job is both wonderful and a marvelous one”

He added that “it has never occurred in Zamfara to see people clamouring for someone to come over and take a lead in the helm of affairs of leadership. Abubakar Nakwada like other speakers said, he was neither contacted nor intimated before the decision was taken but we believed we have to lobby him at the long-run to accept the burden and do the right thing in the overall interest of the people of the state.

Speakers after speakers took time to express their views about Abu Nakwada and why they believed the tune of the music needed to be changed in terms of selection process for those to be elected especially at the position of the Governor of Zamfara state. 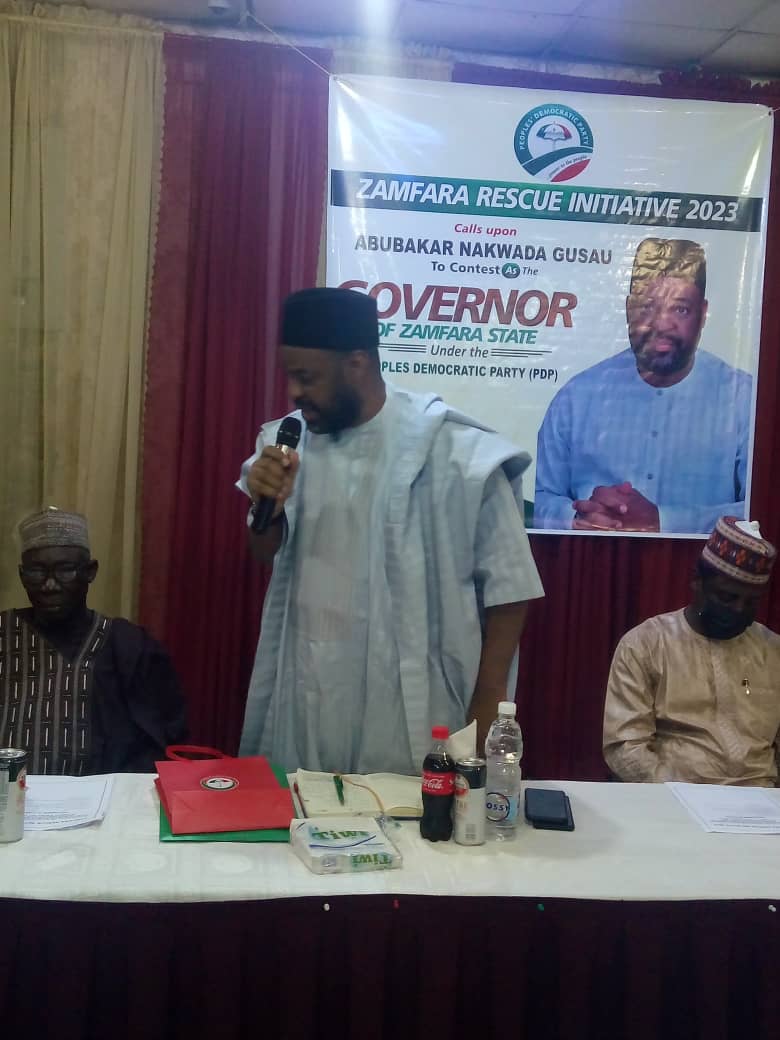 They have testified that when he led the Sure-P programme in Zamfara for instance, a lot of unemployed persons have been engaged through entrepreneurial interventions and job opportunities were created for hundreds of thousands of unemployed youth through the initiative of Abu Nakwada.

“As personal assistant to three ministers of the federal republic of Nigeria and now a substantive Director in the Federal Civil Service, Abubakar Nakwada is fit to climb the Governorship seat of Zamfara. He is a seasoned technocrat and his managerial experiences are what Zamfara needed most especially in this trying moment in order to be able to solve its socio-economic and political crises” says one of the well-wishers”.

As for the chances of the PDP in Zamfara state all the speakers had some level of consensus that in the 2023 general elections political party will not matter anymore in Zamfara because Zamfara people are tired of deceit and party propaganda. What matters to them according to the Speakers is having a capable person who will take new lead for the fortune of Zamfara to change.

“Now the onus is left for the man ABU NAKWADA to make up his mind and answer the clarion call to serve. As for us the supporters, we shall do everything possible to see that this aspiration is fulfilled so that together we can build new Zamfara state” said Aminu Lawal Koramar Boko. 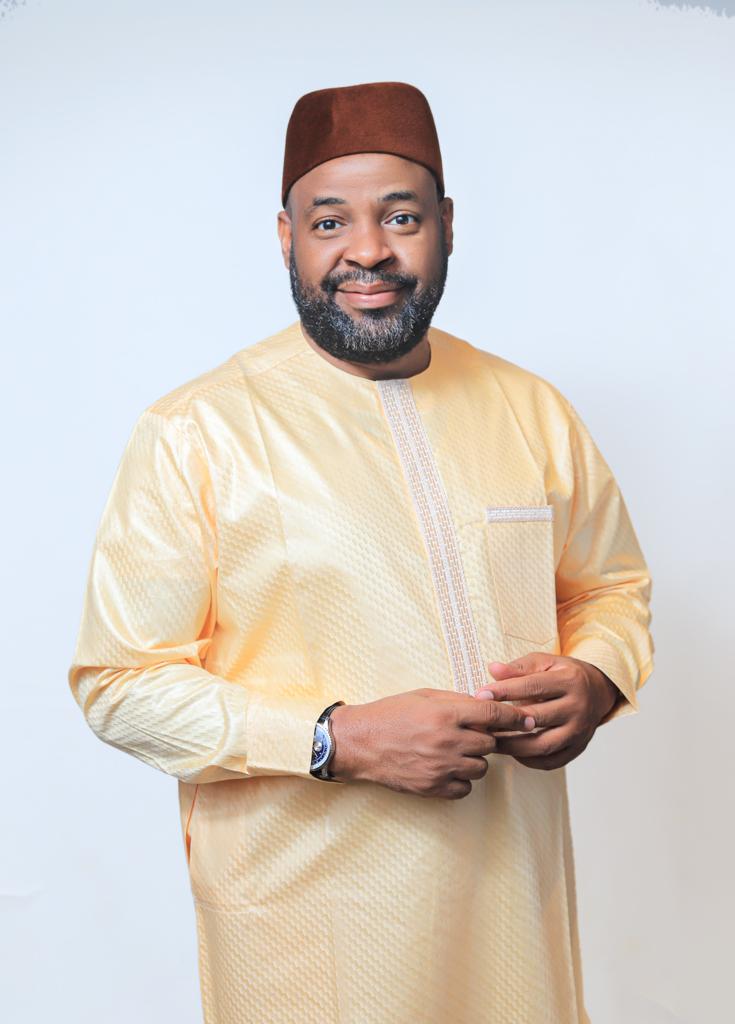 PRESIDENT BUHARI SHOULD COME AND CAMPAIGN FOR HIS CANDIDATE AT EAGLE SQUARE: GOV. FAYEMI