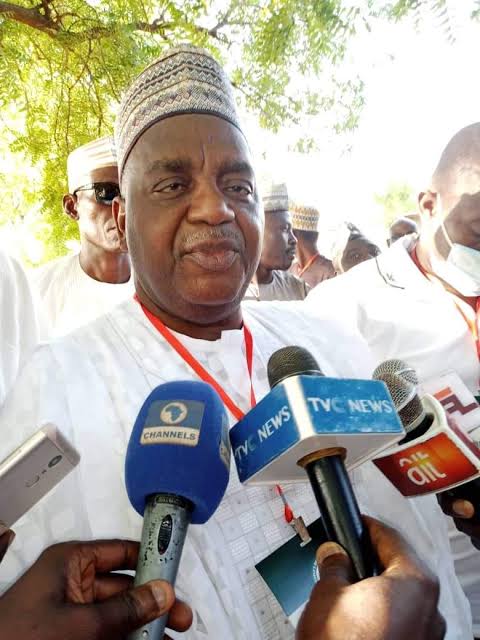 √ ANOINTED CHAIR OF THE PDP YET TO SHOW UP IN ZAMFARA.

During one of our Interview sessions with the Publicity Secretary of Zamfara APC Mal. Yusuf Idris Gusau he has raised alarm that Zamfara PDP does not have leadership for now.

His reasons are: the substantive Chairman who is also a Senatorial candidate, Col. Bala Mande rtd. is facing a political militarization from some powerful political power brokers within the party who wanted him to step down certainly.

He was for instance asked by leaders of the PDP from over (48) Political Wards that made up of his Senatorial districts to stepdown even as they passed a vote of no confidence on him sometimes in June this year.

He is also facing a pressure for him to step down as Chairman because he is now a Senatorial candidate and by virtue of section (48) of the PDP Constitution he cannot be holding dual positions in the party.

During a stakeholders’ Meeting held in Abuja not too long, rumors went viral that stakeholders had asked Col. Mande to step down by way of tendering his letter of resignation, and we learnt that, one Dr. Sani Abdullahi Kaura alias (Coach) was finger-pointed for the Job of the Chairman.

But up to this moment no one has ever seen the letter of resignation of Col. Bala Mande and based on information gathered by this medium Mande said he will not resign because he was duly elected by way of Party Congress and only appropriate procedure provided for by the constitution can remove him.

And a source close to Col. Mande who does not want to be named said Col. Mande  insisted that no one can enforce section (48) on him because the section said one cannot hold two positions at a time and as for his emergence as PDP candidate it is just a privilege until when he wins the election the section cannot validly be enforced on him.

As for the nominated chairman he is nowhere to be found in the political space of Zamfara. He has not even come to Zamfara to have an interactive session with the stakeholders back home since his anointment in Abuja.

No one had seen him participating in the party affairs, not even during the Sokoto grand visit by the gubernatorial candidate Dr. Dauda and the recent one in Kano with the Presidential candidate.

For now there is a big confusion as to who is the substantive Chairman of Zamfara PDP??.

Coming back to the issue of the Deputy Vice Chairman of the PDP in Zamfara when Prof. Jabaka stepped out of the party a vacancy exist, and it was the expectation of the party stakeholders that proper consultation will be made, and appropriate procedures would be followed before picking the replacement of Prof. Jabaka.

But during the same Abuja meeting former Commissioner for Education Mukhtar Lugga was picked and made the Deputy Chairman of the party, probably without appropriate consultation.

A PDP Chairman in one of the local governments interviewed on condition of anonymity, said the choice of Lugga as Deputy Chairman of the PDP in Zamfara wasn’t the consensus of the party stakeholders but an imposition of the few people and majority of the stakeholders are against it.

“We agreed he is a politician at the highest level but remember he just defected to the party and without consulting stakeholders within the PDP to know who he is, someone somewhere manipulated his way and made him to be Deputy Chairman against the interest of those who labored for the development of the party. We saw his imposition as very unfair politically” the source added.

Another Party supporter Idris Abubakar Zurmi said, “the new Deputy Chairman Lugga was not even presented to the PDP stakeholders here in Gusau because as I speak with you, I don’t know him and I never met him L, so I wonder how I will be working with someone at that level without knowing and knowing his capacity politically”.

In the case of the PDP State Secretary Faruk Ahmad Shatiman Rijiya a party source closed to him said Mr. Rijiya has affirmed his position as the substantive PDP State Secretary noting that the politician insisted that no amount of political influence will force him to resign.

“He confirmed that he was elected by the delegates and up to the moment he has not done anything to warrant the stakeholders asking him to step aside his position” the source explained.

Mr Shatiman Rijiya was in June 2022 suspended by the leadership of the PDP in Gusau local government over allegations of anti party, causing disunity and his inability to support the development of the party.

An Investigation Committee was set up to investigate allegations against Mr. Rijiya within two weeks and report the findings.

Since June 2022 nobody has heard about the whereabout of the committee, neither they submit their report before the local governments State Executive Council that allegedly set up the committee.

Few hours later, some faction of the leadership of PDP in Gusau local government led by the Youth Leader of the party featured on Thunder Blowers media platform to distances themselves from the purported committee.

“We have denied in totality any knowledge of this Investigation Committee. We want to reiterate that at no point we had not met and suspended Faruk Ahmad Shatiman Rijiya. It was unilaterally done by the Chairman and the suspension is unknown to the entire leadership”. The youth leader added.

Just like the party Chairman Col. Mande rtd, Shatiman Rijiya was also asked to go and put on Resignation Letter during the Abuja stakeholders meeting.

His Assistant one Mr Zangina was asked to step in as the Acting Secretary pending further decision.

Rijiya insisted that he is not not going to resign his appointment because he has not done anything against the party constitution.

“The state party Chairman and some powerful politicians within the party are behind the crises affecting Mr. Rijiya and because of these few number of people Rijiya will not resign. We are fully behind him, and we shall resist his unjust removal” one of the local governments PDP Chairman insisted.

Another source confirmed to us that “Mr. Rijiya is planning to head to court if the powers within the PDP insisted that he has to resign, and he has the backing of the majority of the SEC members and indeed the local government PDP Chairmen”.

THE SPOKESPERSON OF ZAMFARA PDP IS NOT ACTIVE

As for the PDP Spokesperson, I think the party has the most inactive Publicity Secretary. “He does not speak to journalists on inquiry, he does not respond to calls and neither issue press release on sensitive issues affecting the party” a journalist lamented.

“The man in charge of publicity for Zamfara PDP is not helping matters, things are happening and even where inquiries are made he hardly respond to journalists and the only capable person that usually talk to us is Mr. Rijiya, and now he has issues to clear with the party, and he has stopped talking to the press. The party in Zamfara is now deaf and dumb” another journalist lament.

In the opinion of Saminu Garba Mafara a PDP supporter, if the Publicity Secretary is not active and he cannot be removed, the gubernatorial candidate need to have active spokesperson who will be there for the party because the silence is killing the party gradually.

WHAT THE PARTY NEEDS TO DO TO SAVE THE LEADERSHIP

Mr Yusuf Idris Gusau the APC Spokesperson advised that for PDP in Zamfara to get things right it has to conduct mini convention and allow delegates to elect another sets of leaders as he argued that for now the party in Zamfara does not have Chairman, Vice Chairman and Secretary.

He lambasted the PDP by saying “PDP leaders shall be elected in Zamfara and by legitimate stakeholders known to the law, not by some power brokers in Abuja”.

He insisted that without taking legitimate steps of doing things in line with their party constitution and extant laws they may lose grounds in 2023.

Nasir Bamanga a PDP chieftain in Zamfara said, he is sure the gubernatorial candidate Dr.  Dauda Lawal and indeed other stakeholders would surely do something urgently to address the leadership crises in Zamfara State.