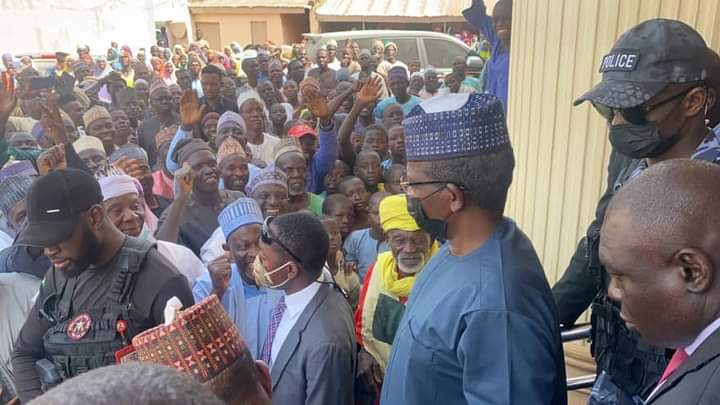 Zamfara state Governor Bello Matawalle has visited Anka and Bukkuyum Local Governments to commiserate with the people of the affected areas and assess the level of damages done to the victims of recent armed bandit attacks.

The Governor, who was accompanied by some members of the state executive council and all security chiefs, decried misrepresentation of fact by some section of the media regarding the tragic incident.

According to the official statement issued to journalists in Gusau said, the Governor went to the affected areas to see things for himself and assess the level of damage done by the serial attacks launched at the various communities in the two affected local government areas of the state.

The Governor also paid courtesy visit to the two monarchs of Anka and Bukkuyum where he commiserates with them over the tragic incident.

The emirs, who gave the Governor authentic list of villages attacked and the list of victims who lost their lives, wondered where some sections of the media got their figures reported as an aftermath of the attack.

According to the statement, the actual figure of casualties recorded involving the two Emirates stood at (22) for Anka emirate and (36) for Bukkuyum local government.

The statement added that seven villages were involved in Anka emirate, while one village is also affected in Bukkuyum emirate council.

The two Emirs called on the Governor to continue with his laudable effort of fighting banditry in the State.

The Governor who expressed sadness over the tragic incident promised to continue to take decisive measures that are aimed to bringing an end to the humanitarian crises arising from the armed bandit attacks.

e then decried the noticeable slide in factual reportage by the media, who have variously quoted scary figures of deaths arising from the recent attacks in the two affected local government areas.

The Governor Matawalle said: “It is also obvious that my administration is not only threatened by bandits in the bush but also political bandits in our towns and villages.

“These are those politicians who manipulate the crisis for political gains, and the informants who aid the bandits in their nefarious activities. But we shall conquer all by the strength of the Almighty Allah,” he assured.

The Governor announced that the state government would, henceforth, treat those who report deliberate lies about bandits escapades as terrorists as well.

“We cannot fold our arms and allow people to always create panic and paint a gorier picture of actual happenings in the state. We are faced with a big trial which we are doing our best to address.

“There is no justification for anyone to wish us deeper trouble than where our people are today”, Governor Matawalle warned