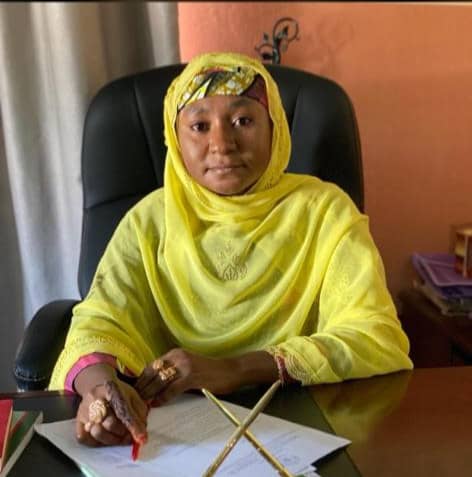 Zamfara State government has approved the appointment of Hajiya Amina Ahmad Gusau as the new Executive Secretary of Zamfara Female Education Board.

She took over from Hajiya Balira Bagobiri who served as the Executive Secretary of the board before her elevation to the status of Permanent Secretary deployed to Ministry for Women and Children Affairs.

Until her appointment Mrs. Amina Gusau was a Director General in charge of RUGA project one of the initiatives of the Governor of Zamfara Bello Mohmamad Matawalle.

Born in 1979 to the family of a seasoned educational administrator, Alh Ahmad Zabarma Gusau, Mrs Amina Gusau attended COE Sokoto Staff Primary School between 1984 and 1990 from where she proceeded to Federal Government Girls College Gusau (FGGC) between 1991 and 1996.

By 1997 she secured admission at the Federal College of Education Technical Gusau where she successfully completed her National Certificate in Education (NCE) in (Business Education) in the year 2000.

She then proceeded to Usman Danfodio University for Degree programme which she successfully completed between 2005 and 2009 and bagged certificate in B. ED Education (Economics).

Mrs Amina Gusau shifted her academic trip to the famous Ahmadu Bello University Zaria in 2016 where she earned another Masters degree in Educational Psychology.

She is currently undergoing her PhD programme in educational psychology at the same Ahmadu Bello University Zaria .

On her job experience, Mrs Amina Gusau worked at the LEA Gusau between between 1996-2000 fronw where she was moved to Unguwar Zabarma primary school in Gusau between 2000-2002.

She was later transferred to Damba Model primary school Gusau and worked there as classroom teacher between 2002 and 2008.

By 2010 she moved her teaching carrier to the state College of Arts and Science ZACAS Gusau where she worked at the department of education as lecturer between 2010-2012.

She was later moved to serve as the Principal of ZACAS Staff Secondary School between 2016-2019.

In the same year 2019 she was appointed as Director General RUGA project by Governor Bello Matawalle a position she held until her recent appointment.

She has many seminar presentations to her credit, and also attended many conferences and seminars that are related to educational administration and management.

Mrs Amina Ahmad Gusau is married to Alh Abubakar Jafar Maradun and blessed with four children two of whom are now in the University one studying medicine and the other one studying law.

She has since assume work at her new duty post.