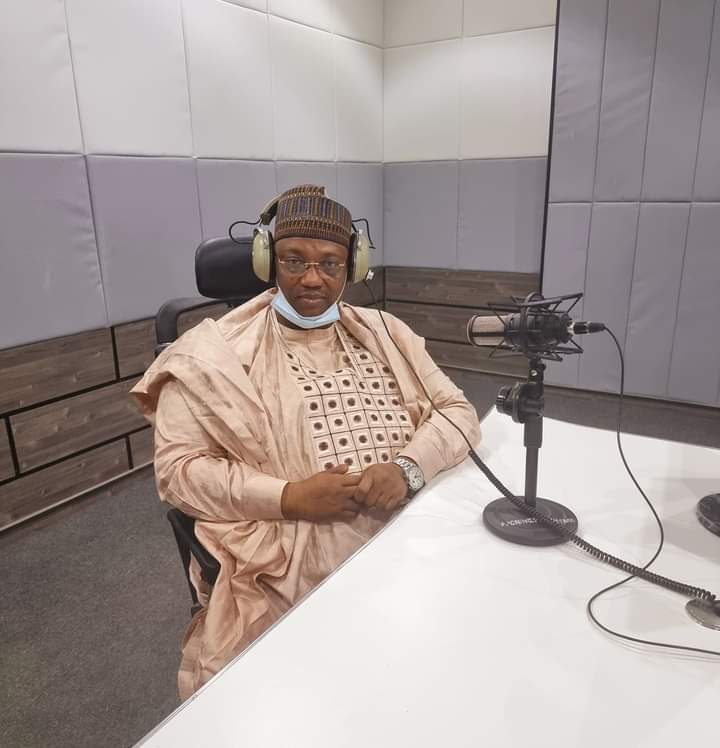 One of the APC stalwarts in Zamfara Sani Abdulahi Wamban Shinkafi has made a formal declaration for the contest of the APC National Chairmanship position.

Wamban Shinkafi who made the declaration at the APC National headquarters in Abuja on Wednesday said if elected he will reorganize the party and make it more popular through mass mobilization of supporters for the party.

“It is with great pleasure and a sense of humility that I welcome you to this historic declaration, I am here today to formally express my interest to contest for the position of National Chairman of our great party All Progressives Congress (APC) at the National Convention slated for 26th February 2022.”

Wamban Shinkafi said, despite his experiences he voluntarily resign from politics to concentrate on his business activities noting that he has more than enough experiences to manage the party.

“I would want to continue with the great job being done by the Acting National Chairman of the Caretaker and Extra Ordinary Convention Planning Committee (CECPC) His Excellency Malam Mai Bunu in re-organizing and making the party the greatest party in Nigeria”. Wambai added.

“As you may all may recall All Progressives Congress (APC) was registered as political party in Nigeria by Independent National Electoral Commission (INEC) on July 31 2013, it was a product of historic merger of major opposition political parties which successfully defeated the ruling People’s Democratic Party (PDP) during the 2015 general election”.

“As I present myself to contest the position of the National chairman of our great party, it is pertinent to reflect on what the constitute the APC, All Progressives Congress (APC) as a progressive party which represent the collective will of over 41 million registered members of the party in all the 36 states of the federation and federal capital territory (FCT) Abuja”.

“It is my hope that if and when elected as National Chairman of the party, we will reposition and reorganize the party based on its philosophy of social democracy which basically means people oriented, membership mobilization and recruitment and mass based political organization”.

“To be able to actualize these into concrete action that visible and verifiable Under our national leadership we will have to do a couple of things differently in the day-to-day management of the party affairs, while inter facing with all those elected on the platform of the party at all levels”.

Wambai added “or me, it is fundamental to be able to have a membership drive of the party at the grassroots across all the electoral wards and polling units throughout the country, it is important that we must ensure that we have an authentic and verifiable certified true copy (CTC) membership registers that can be checked and verified by members and even non members of party, the leadership of our party under our watch will maintain the credible membership register with the credible membership register it will help to eliminate abuse, corruption and manipulation in the conduct of intra party election from unit, ward, local government, state and National levels, it will also create a credible platform for conducting direct primaries which will afford every member of the party primaries at all levels rather than the indirect primaries, delegate election”.

Shinkafi added “APC must be seen to operate on the basis of its rules which is the party constitution and other laws of the federation as they relate to the formation and administration of political parties in Nigeria indeed, the constitution of the party is the basis of the contract between the party members, thus a credible membership register is the pre-condition for sustainable internal party democracy as ruling party formed on the values of social democracy, we must be seen to play politics of inclusion”.

“We will organize activities at regular intervals across the six (6) Geo political zones where issues and challenges on politics, security, economy and agriculture will be discussed by the party leadership, elected, appointed officials, and members of the party at all levels”.

“We will create platform for setting National development agenda and security, economic recovery plans that will create employment, improve personal income of people of Nigeria and increase Gross domestic product (GDP) in Nigeria”

“The party should therefore serve as a verifiable platform to keep executive and legislature arms of government to remain faithful and focused on delivering dividends of democracy to the electorates that elected them in offices”.

“We will reposition the party for a united and indivisible Nigeria, we will build the capacity of the leaders and members of the party to improve administration, organizational structure of the party, financial management, accountability, transparency and ensure proper management of the party throughout our tenure if elected at the forthcoming National convention”.

“We will promote symbiosis relationships between the three arms of government as provided in the separation of power in the Presidential system of government in Nigeria (executive legislature and judiciary) but as we know the judiciary is independent because they are not subjected to an election constitutionally. The party will in all its actions and words respect the principles of separation of power”.

“The party under my leadership if elected whenever there is conflict between the parliament and executives the party must take proactive measures to reconcile the two arms to work in friendly manner both must respect the principle of separation of power we shall put in place internal mechanism for conflict management to avoid party faction and internal crisis within the ruling party that is what make it to loss elections in Bauchi, Adamawa, Rivers, Sokoto, Imo, Oyo, Edo and Zamfara state respectively, apart from legislature seats, both at the states and National assembly that were dashed away as a result of poor handling of the party in primaries in 2019 general elections, nomination exercises”.

“We will intervene in the lingering crisis between the governors and members of the national assembly in their respective states, conflict of interest or just being victims of rumor mongering when I am given the privilege to the lead by being elected at the national convention, we will proactively engage all the parties involved in such conflict with a view to helping then find common ground on basis of justice, equity, transparent faithful and loyal to the members of the party”.

“I belong to all members of our great party, leaders of the party without discrimination or bias, I am praying to Almighty Allah (SWT) to give me good health, wisdom, to discharge my duty with the fear of Allah (SWT)”

“We shall do everything immensely possible to protect and preserve the interest of our members of the party and all Nigerians who voted for APC in 2015, 2019 general election indetermination.

“I strongly believe that with my determination, commitment and conviction to work with the President Muhammadu Buhari GCFR Professor Yemi Osinbajo (SAN) GCON, Governors, State House Assembly Members and the Members of National Assembly We will restore public confidence and support for our party and Government at all levels”.

“All progressives congress (APC) needs a national chairman that will lead the party to the needs aspirations and yearning of women and our young talented Nigerians”.

SEN. YARIMA ROLL-OUT REASONS FOR ZAMFARA APC CRISES IN 2019 AS HE DECLARES FOR PRESIDENTIAL RACE IN 2023