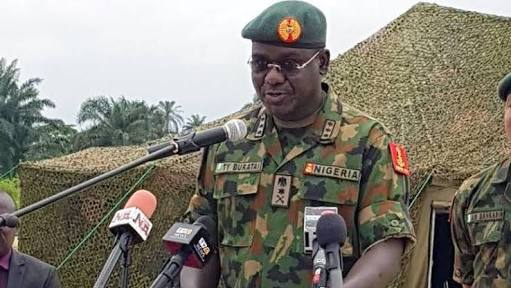 The Chief of Army Staff, Tukur Buratai, has tasked the  senior military officers and operational commanders to brace up towards ending the menace of insecurity plaguing the country.
The Acting Director, Army Public Relations, Sagir Musa, disclosed this while briefing newsmen on the outcome of the meeting between Buratai and the senior officers on Monday in Abuja.
Mr Buratai said the meeting was a wake up call in the efforts to combat Boko Haram insurgency, North West banditry and myriad of other security challenges across the country.
He said the meeting focused on security matters and the need for commanders, officers and men to redouble their efforts and ensure that all security threats in the country were effectively checkmated.
General Buratai directed all officers and men of the Nigerian Army to ensure that the charge given by President Muhammadu Buhari on security challenges across the country was fully implemented.
“The criminals and their collaborators and sponsors must be exposed, flushed out and destroyed.
“Already the Nigerian Army has commenced major reorganisation of her operations for optimal performance and all Commanders must lead the charge by being out in the field to effectively oversee the operations.”
The COAS warned that he wanted to see an all-encompassing positive change in the Nigerian Army operations and the security situation in the country.
He warned that, there was no time for complacency or excuses, adding that there would be no tolerance for shortcomings or failures in the effort to immediately reverse the security situation.
He assured Nigerian that the army would continue to collaborate with other security agencies to rid the country of all forms of criminality.
Related Topics: