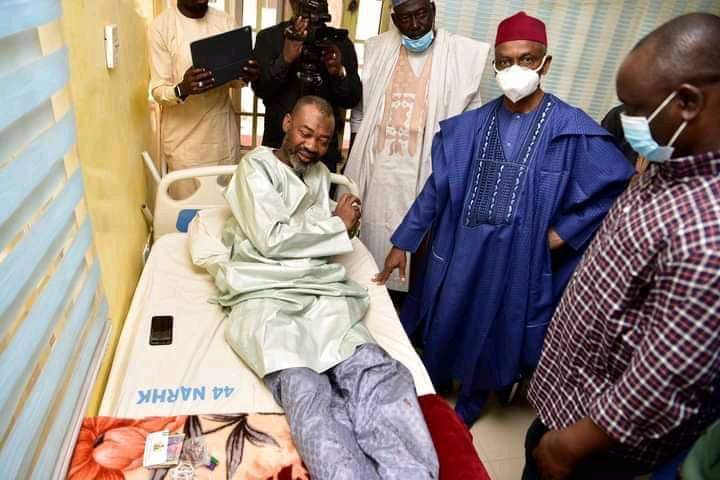 The former Deputy Governor of Zamfara State Malam Ibrahim Wakkala has spoken on the Monday train attack which involved him and over (900) other passengers on board.

Malam Wakkala who spoke at his hospital bed said, all he could remember was while they were moving smoothly they heard the train shaking repeatedly, noting that the next they could hear was bomb explosion all over.

He said after hearing multiple sounds of bomb explosion, the bandits started shooting sporadically at the train, noting that their operation lasted for close to one and a half hours.

He said while the shooting lasted, they detonated another bomb again, and from there they got access to the train and continue shooting at the passengers.

He said they have injured many passengers including him who sustained a gunshot on one of his legs.

He said for the almost one and a half hour while the operation lasted security agencies could not arrive to the scene but noted that after their arrival they have tried very harder to dislodge the gunmen, but they eventually overpowered them.

He also explained that the security agencies have tried in the process of evacuation of the injured victims as well as those who lost their lives.

He added that with what he saw, there is need for the government to allow for recruitment of more military personnel so that they can take charge of the security of the country.

Regarding his health condition, Mal. Wakkala said as of now he is getting better but explained the bullet fired is still in his leg and soonest an operation will be conducted to get it removed.

He thanked almighty Allah for sparing his life and that of other survivors, noting that he has personally seen corpses of many train passengers killed during the operation.