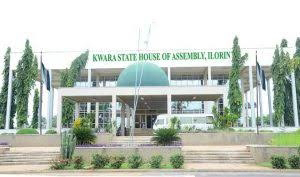 Kwara State House of Assembly has set up an Ad-Hoc Committee to investigate finances  of Local Governments in the state.
This followed a Matter of General Public Importance raised by the Chairman, House Committee on Local Government and Chieftaincy Affairs, Hon Abdulgafar Ayinla on the floor of the House.
Hon Ayinla called for the investigation of Local Governments’ finances from May last year to date to guarantee transparency in the Local Governments administration in the state.
He said the state Governor, Mallam Abdulrahman Abdulrazaq invited Economic and Financial Crimes Commission and an independent panel to look  into the matter as the governor has not touched Local Governments funds since he assumed office.
Reading the resolution of the House, the Speaker, Rt.Hon Yakubu Danladi Salihu announced  Hon.Abolarin Ganiyu Gabriel(Ekiti) as the Chairman of the ad-hoc committee with Hon. Ambali O.Ibrahim(Owode/Onire),Hon. Mohammed Baba Salihu(Okuta/Yashikira),Hon. John O.Bello(Lanwa/Ejidongari) and Hon. Jimoh Ali Yusuf (Ilorin East) as members.
The Speaker charged the Ad-hoc committee members to conduct thorough investigation into the matter and report back to House in the next two weeks.
Also today, a Bill for a law to establish Kwara State Geographical Information Service passed through first reading at today’s plenary.
Meanwhile, four petitions were today laid before the state  Legislature.
The petitions are petitions on N9 billion contract scam of Kisi- Kaiama road, Lack of due process and Employment Racketeering at Kwara State College of Education,Oro, Non payment of workers salaries  of some Local Governments workers in Kaiama Local Government by the previous administration and illegal acquisition of land.
The petitions were presented before the House by  member representing Ekiti Constituency, Abdulganiyu Abolarin-Gabriel, member  representing Owode-onire Constituency, Wahab Opakunle, member representing Irepodun Constituency, Felix Tayo Awodiji and Muhammed Baba Salihu of Okuta- Yashikira Constituency
The Speaker Rt. Hon Yakub Danladi Salihu referred the four petitions to relevant House Committees for further legislative action and report back to the House in due course.
Related Topics: