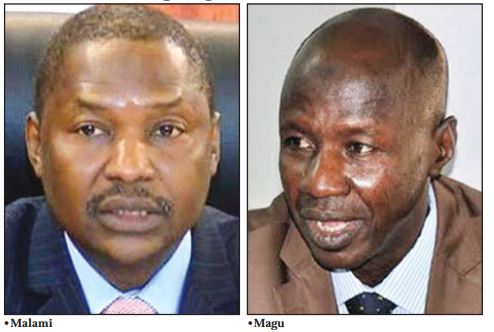 An audit panel has raised questions on the whereabouts of the interest accruing from N550 billion recovered by the Economic and Financial Crimes Commission (EFCC) from treasury looters.

The panel has also queried what it perceives as discrepancies in the EFCC records of recovered funds.

The questions are contained in the final report of the  Presidential Committee on Audit of Recovered Assets  (PCARA)  covering May 29, 2015 to Novembr 22, 2018

The panel is different from the Ayo Salami Presidential Investigation Committee which is currently probing allegations against the suspended Acting Chairman of EFCC, Mallam Ibrahim Magu, by the Attorney General of the Federation and Justice Minister, Abubakar Malami (SAN).

Sources said yesterday that none of the assets seized by the EFCC had been sold, except the 244 trucks which a Federal High Court ordered to be disposed of by the Deputy Chief Registrar of the FHC in conjunction with the Department of Petroleum Resources and the commission.

The proceeds of the sales were remitted into the Federal Government Recovery Account, it was gathered.

The News Agency of Nigeria (NAN) in a report on Saturday quoted PRACA as saying in its report that it was “quite disturbing that conflicting figures are being circulated in the public space by EFCC as the amount of recovered funds.”

Citing foreign currency recoveries as an example, the audit panel said: “ EFCC reported a total naira equivalent of  N46,038,882,509.87, while the naira equivalent of the foreign currency lodgments were N37,533,764,195.66, representing a shortfall of These inconsistencies cast a serious doubt on the accuracy of figures submitted by the EFCC. It is the committee’s view that the EFCC cannot be said to have fully accounted for cash recoveries made by it.

“It must be pointed out that the discrepancy of more than thirty nine billion naira does not include interest accrued in this account since it was opened.

“It therefore casts serious doubt on the credibility of the figures and means that substantial amount of money has not been accurately accounted for.

“Failure to report on the interest on actual lodgments clearly establishes that interest element of over N550 billion has been re-looted relating to the period under review.

“This is an apparent case of manipulation of data in a very brazen and unprofessional manner, and this has greatly eroded the public confidence in the anti-corruption efforts,’’ the report stated in part.

The PCARA alleged acts of corruption and money laundering against some EFCC officials, including Magu.

It said: “The NFIU reports established that the Acting Chairman has been using different sources to siphon money from the EFCC, and in some cases collecting bribes from suspects.

“The report has shown that a particular Bureau de Change based in Kaduna has more than 158 accounts and has been receiving huge sums of funds,” the PCARA report said.

The panel was tasked to audit the Assets and Finances of the EFCC as a legal entity from 2015-2020, with a view to establishing compliance or otherwise with procurement procedures of the EFCC in line with the provisions of the Procurement Act.

After selling the trucks, the proceeds were remitted into the Federal Government Recovery Account.

Sources also said there was allocation of vehicles to some government agencies through special auction with Presidential approval.

Assets under interim forfeiture order were also rented by some Ministries, Departments and Agencies (MDAs).

It was learnt that recently the EFCC secured a presidential approval to dispose of 450 forfeited vehicles in Abuja and Lagos.

But the sale of the vehicles is yet to commence.

Despite his travails, the suspended Acting Chairman of EFCC has ruled out a court action against the Federal Government.

He told his relations and lawyers that he has faith in President Muhammadu Buhari to ensure fairness and justice for him.

These details are contained in an investigative fact-sheet on the assets forfeited to the Federal Government.

The suspended EFCC chairman had been accused of selling assets to cronies and relations.

The fact-sheet was already made available to some MDAs and government officials.

Although Magu has denied the allegation, the Presidential Investigation Committee has directed all sectional heads, including the Director in charge of Assets Forfeiture, to submit their reports from 2015 to 2019 on or before Thursday.

Sources said “not a single recovered or forfeited property has been sold and the proceeds fraudulently converted.

“Also, there is a Presidential approval to dispose of 450 forfeited vehicles but no sale/ disposal has been conducted yet.”

One of the sources said: “In the coming days, the comprehensive list of these assets will be defended by the relevant units and Magu.

“It is important to clarify that some MDAs were involved in all the processes on how to dispose of assets; the EFCC or Magu was never unilateral.”

Some of the MDAs which benefitted from the forfeited assets after Presidential approval are the State House; the Ministry of Humanitaria
n Affairs and Disaster Management; the North-East Development Commission; the National Directorate of Employment( NDE); Pension Transitional Arrangement Directorate (PTAD); Voice of Nigeria (VON); the National Commission for Refugees and Displaced Persons and Lagos State Government.

Those who have sought to rent properties under interim forfeiture are the National Council for Arts and Culture and the National Human Rights Commission.

Other beneficiaries are the Nigerian Army, the Federal Ministry of Finance, the Fiscal Responsibility Commission, Nigerians in Diaspora Commission and the Federal Airports Authority of Nigeria (FAAN).

Magu is said to be not disposed to challenging the Federal Government in court under any guise.

His counsel, Mr. Wahab Shittu, made the clarifications in a chat with our correspondent.

He said: “Magu will not take the Federal Government to court because of his faith in the administration of President Muhammadu Buhari and his respect for the person of the President.

“He also believes that notwithstanding the campaign of calumny, justice will prevail.

“Magu is convinced that there are sufficient documentary materials in the custody of various government agencies  that will exonerate him.”

The Ayo Salami panel is expected to continue its investigation on Sunday.