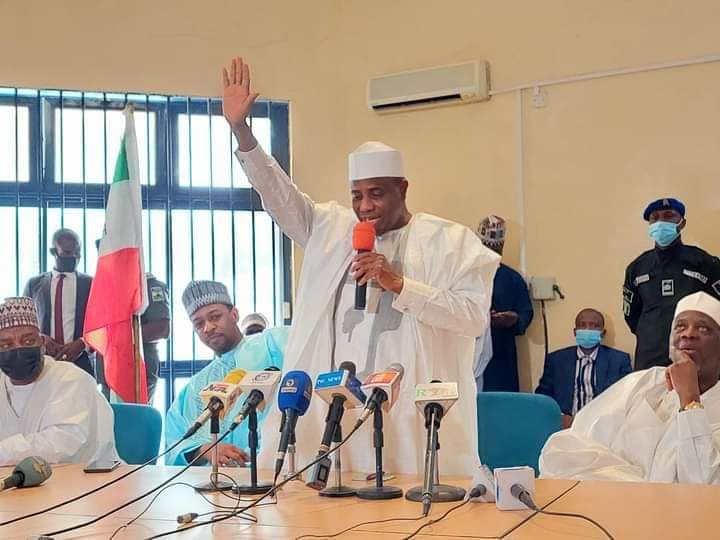 Gov. Aminu Waziri Tambuwal of Sokoto state has reiterated that the People’s Democratic Party (PDP) will regain its pride of place in Nigeria and Zamfara state in the forthcoming political dispensation.

Gov. Tambuwal stated this on Monday in Gusau, Zamfara state capital, where he had gone to consult the party’s stakeholders on his options to prosecute or drop his ambition to run for the position of President of the country in 2023.

Muhammad Bello the Spokesman of Governor Tambuwal in a statement said, the Gusau visit is the second leg of Gov. Tambuwal’s Presidential bid discourse. Last week on Tuesday he visited Jigawa state.

According to him, the rollback of the fortunes of the PDP in leading Nigeria and Zamfara state will soon be over.

Enumerating the ills fostered on Nigerians and the people of Zamfara by the APC government as insecurity, economic downturns, debilitating healthcare system and the “collapse of virtually everything,” the Governor pledged that “if we succeed in our bid the country will witness a reversal of the current bad fortunes.”

He also expressed sympathies to people of Zamfara state on the spate of insecurity and urged them to collectively invoke a security summit to brainstorm on the problem and work toward getting a solution.

Receiving Tambuwal’s delegation the Deputy Governor of Zamfara state, Barrister Mahdi Aliyu Gusau expressed appreciation to the team for the visit and promised that Zamfara PDP supporters will remain firm to the fulfilment of the presidential ambition of Aminu Waziri Tambuwal if declared