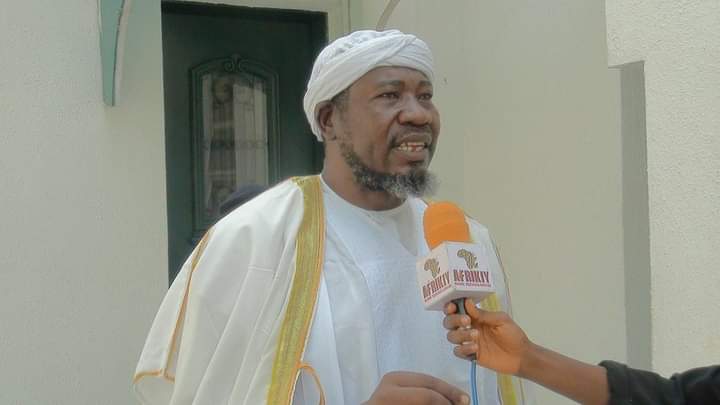 The suspended Imam of Apo legislative Quarters’ mosque Sheikh Nura Khalid said, he has not regretted his comment during the last sermon he delivered on Friday because what he said is nothing but the truth.

The cleric who stated this In an exclusive interview with the BBC Hausa service said, for him to stop saying the truth, and stop telling authorities to do what is necessary and stop the killing is better he embarks on hard labor.

The committee of the mosque headed by senator Saidu Dansadau has announced the suspension of Sheikh Nura Khalid on the ground that his Friday sermon delivered is capable of inciting the public.

But in a reaction, Mal. Nura Khalid said, he was shocked seeing someone from Zamfara a state where there is no peace will come out to announce the suspension of a cleric who preaches that the killing of innocent lives should stop.

He further said, he wondered why killing of innocent lives did not become inciting but asking those killing innocent lives to stop will become an act of incitement.

“It is surprising that someone from Zamfara a state where raping of innocent women is going head on according to someone who wrote on his Twitter handle and up to now the state is not peaceful will presently come and announce the suspension of cleric who simply says the killing should stop.

“His Deputy is from Niger state, and he cannot go to his home state due to insecurity”.

Sheikh Nura said he will continue preaching on the problem of insecurity, noting that issue of asking him to keep quite does not arise.

On whether he can go back if he is reinstated, the Imam said, it defends. If they ask him back with humility and respect he will accept it, but if they put a condition that he has to stop saying the truth he rather goes for hard labor than to come back and become an Imam who will not say the truth.

TSAFE ATTACK: BANDITS HAVE NOW TAKEN THE FIGHT TO THE DOOR STEP OF THE GOVERNMENT

CLERIC, ASK SEN. DANSADAU TO REVISIT SOCIAL MEDIA AND READ WHAT NIGERIANS ARE SAYING ABOUT HIM