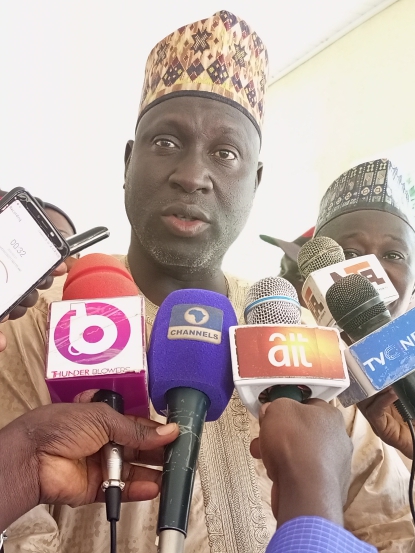 After the hearing of the seven complainant witnesses (CW) brought before the panel of investigation instituted to investigate allegations of infractions against the Zamfara Deputy Governor Mahadi Aliyu Gusau we had a chat with the state attorney general and Commissioner for Justice Barr. Junaidu Aminu.

Here are the transcript of the interview!!!!!!!!

“On Friday to be precise, there was an attempt to serve Chief Mike Ozekhome the lead counsel to the Governor, CJ and Speaker. I was in court personally in Abuja and he said he was served on Friday”.

“The senior advocate representing the PDP knows that the life span of an experte order is (14) days and the forteen days have expired. There were a lot of papers before the court and nothing was said about them”.

“On Monday I appeared before the court. I was in court personally and no order was made by that court. If there is any order I believed, I believed the learned senior advocate would have applied for the certified true copy of that order and make it public”.

“I listen to that interview and he said the pronouncements was advisory and if it was an advise must I listen to your advise?”.

“He has admitted that he has been served which means he is aware of the pending proceedings well let us see. The highest thing is that if he has any basis on any irregularities regarding what happened today and that of tomorrow or the day that is going to be adjourned for judgement then he can challenge it in court”.

“As rightly said by the lead counsel to Zamfara state house of assembly, once an impeachment proceeding is initiated no court can stop it. The constitution is very clear”.