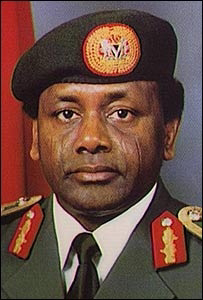 Dear General Abacha!
Sir,
Few months before your sudden and in deed sad demise on 8th of June 1998, about five political parties then in Nigeria adopted you as its presidential candidate.
Many people cited your outstanding qualities for such a unanimous choice. The intended Democratic transition was however star-crossed by the inevitable. May Allah grant you Aljannah Firdausi.
Few weeks later, Some people began to come out with allegations of corruption against you to a level that the Phrase: “Abacha loot” is now part of the lexicon in the tacit Nigerian economic dictionary as if you run the government alone.
While I can not completely exonerate you from all the allegations, I sincerely sympathise with you and your beloved family for if your were alive you would certainly have had your own side of the story. Besides, you were not the only leader who  ruled this country yet you are the only to have attracted all sort of accusations without opportunity to accept or reject them as you have gone the way of our ancestors.
Since the demise of late Wada Nas none except your CSO major Hamza Almustapha has made any attempt to speak or give any clarification in your favour. Allah knows what actually transpired during your regime and is the ultimate Judge of what we do in the open or in secret. He is Just to both the dead and living.
I Sani Ahmed Sambo magayakin mada do hereby  fondly remember you at your 22nd years in the grave. When you died on the 8th of June I wrote an article tiled “The National Tragedy” for our press board then at SSCOE sokoto as an NCE student Leaning how to teach English Alhamdulillah I am still learning at a bit higher level now and I teach others too.
Allah ya jikan ka da rahama ya kyautata makwancin ka. Mu kuma Allah yasa mu cika da  imani da ayyuka nagari. Rest in peace the no non sense General!
Related Topics: