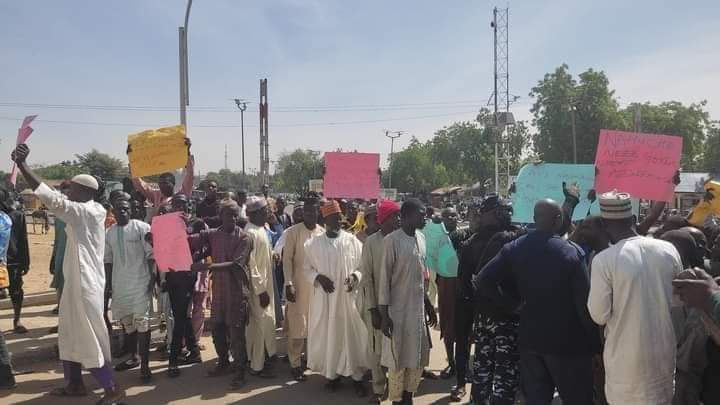 Dozens of protestors from Nahuche Community in Bungudu local government area of Zamfara state staged a protest to show their anger over incessant attacks on their community by suspected armed bandits.

The protestors who carried placards with various inscriptions insisted that, they have lost prominent personalities in their communities, including one Alh. Hadi Baban Geme to a reckless armed kidnapper even after payment of (N35M) as ransom.

They took their protest to the entrance of Zamfara state government house Gusau.

The protestors alleged that at different fora people of Nahuche community have paid money worth over (N200M) as ransom to the kidnappers, and yet, they are not allowed enjoying relative peace.

Addressing newsmen after the protest, the leader of the protestors and one time former council Chairman of Bungudu Musa Abdullahi Manager said for long people of Nahuche community no longer sleeps with their eyes closed due to the heartless activities of the armed bandits.

Manager further said many people of the community have been with the kidnappers for long while even on Saturday another set of people have been kidnapped.

He lamented that recently a prominent businessman Alh. Hadi Baban Geme was kidnapped and eventually killed by his abductors, even after payment of N35M as ransom. Our people were shocked on hearing the news of his death.

DEPUTY GOVERNOR MAHADI ALIYU GUSAU & PDP OFFICIALS ARE USING THE MEDIA TO PLAY WITH THE INTELLIGENCE OF ZAMFARA PEOPLE FOR SELFISH POLITICAL AGENDA AHEAD OF 2023.