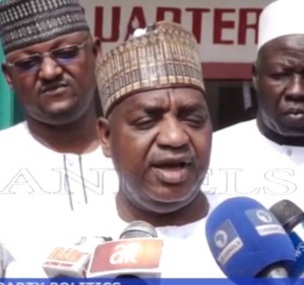 The Chairman of the People’s Democratic Party in Zamfara state Col. Bala Mande (rtd) has accused the ruling APC government of Bello Matawalle of using threat of arrest to persecute and intimidate the principal officers of the party in the state.

Col. Mande who declared this during a Press Conference on Wednesday said, his Vice Chairman Prof. Jabaka is under threat of being arrested simply for speaking the truth about how government is being run by the APC in the state.

He alleged that they have information that the state government has secured arrest warrant against the Professor and that he is being sought for like animal in the forest.

Col. Mande said Jabaka in one of the press conference accused the Governor of living the state with imminent security crises and went to Niger to attend annual wrestling noting that, this fact has now caused him a big threat to his life

He also said another offense of Prof. Jabaka was raising alarm that, the Governor has been allocated the sum of (N31b) as cash allocation/security vote and the government took offensive of that fact revealed by the Professor Jabaka and decided to go after him.

Col. Mande added “there cannot be democracy without opposition voicing out because the people cannot voice out, so they have to look for the opposition to voice out the wrong of the government, and it is not to ridicule anybody but to make the government do the right thing”

“the opposition says where the government is wrong to enable it do what is necessary for the people of the state”.

While expressing concern for the step taken to allegedly molest the members of the opposition Col. Mande said “our principal officers are being sought for the way hunters are searching for the animals just for telling the government to do what is necessary”.

Mande added “if the government wanted us to be silent it should do the right thing”.

Col. Bala Mande called on the relevant security agencies to observe things as they unfold in Zamfara saying, democracy is under threat in Zamfara state.

While characterizing the development in Zamfara as sad, Mande said, the tragedy has been extended to the media especially by citing references to the recent attacks on the corporate head office of Thunder Blowers for what he described as “identifying with the opposition and given them opportunity to voice out”.

But in a swift reaction to the allegations raised by the PDP State Chairman, the Spokesperson of the APC Matawalle faction, Mal. Yusuf Idris said, the recent noise by the Zamfara PDP is just a demonstration of their “sacred guilt” noting that, leadership of Zamfara PDP recently has been making blanket accusations which to their consent they knew they cannot prove.

He said, that is why they are making mockery of themselves thinking they would be called to defend themselves against the baseless allegations against Matawalle government and APC as a party.

He said Governor Matawalle or his party APC has nothing to do with the allegations of getting someone arrested in PDP as alleged by Col. Mande but noted that security agencies would surely do what is necessary to prevent the outbreak of law and order.

He asked PDP to always make sure that they have crossed-checked their facts before going to the press to castigate the Governor and his government noting that, any allegation raised against the Governor or his government henceforth must be substantiated by the alleged.

ANOTHER STAFF OF FCET ZAMFARA ABDUCTED BY GUNMEN