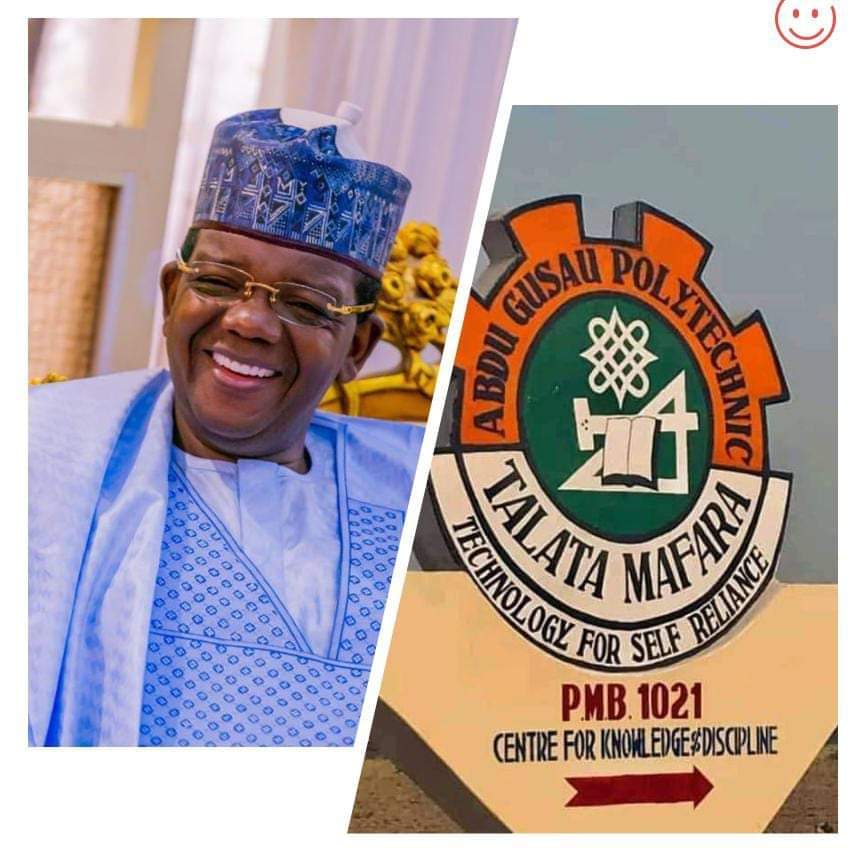 Abdu Gusau Polytechnic, Talata Mafara was relocated to its present permanent site in Talata Mafara for 26 years now, precisely, in 1996.

When the Polytechnic was relocated, the only structures put in place were a few number of classrooms, some of which were also converted to serve as office accomodation while the whole road network then was less than two kilometers.

The institution has suffered serious infrastructural deficit before it finally started to improve gradually especially with support from the Education Trust Fund, ETF before it metamophose to the present Tertiary Institutions Trust Fund, Tetfund.

Under the Tetfund intervention, a number of additional classes, laboratories, engineering workshops, equipments and human capital development to mention but a few were derived by the Polytechnic.

The present Rector of the Polytechnic, Professor Shaaya Shehu Mafara, (Magajin Rafin Mafara) is the 5th rector of the institution whose impact cut across not only in Zamfara state, but the country in general.

After years of managing the institution by his predecessors who played vital roles in uplifting the standard of the Polytechnic, both in academy and character especially the gigantic efforts made by Alhaji Abubakar Liman Shinkafi who served for two consecutive terms of four years each, Prof. Shaayau became the next rector that the history of the now reputable institution will never be forgotten.

The appointment of Prof. Shaaya Shehu Mafara to me, remains one of the greatest achievements of His Excellency, the executive Governor of my dear Zamfara state, Hon. Dr. Bello Muhammed, MON, (Danmadamin Mafara) in the educational section of the state.

I may be very biased because of my annoyance to recall the situation of the institution during his immediate predecessor’s single term in view of mismanagement of resources, collapsed system of administration and open corruption.

One thing I always remember is the number of petitions I received every time I visited the institution to update the public on happenings around the educational sector.

One popular Hausa proverb says, ( in kaji shiru lafiya), silence means yes! After the appointment of Prof. Shaaya, a seasoned lecturer from Usmanu Danfodiyo University, Sokoto, he give much emphasis to enhancing the lost glory of the institution’s known cordial relationship between staff and management, students and lecturers, and moved towards enhancing the environment and finding conducive teaching, learning and research environment.

I am a witness to how Professor Shaaya has been having sleepless nights and restless days just to ensure the stability and revival of the lost glory of the Polytechnic.

All can agree with me that, it’s one of his popular adminstrative excellent leadership style that, he treats with utmost speed, files that come to his office, no file stays overnight in his office.

Today it’s interesting to note that, Prof. Shaaya has achieved much better in organizing unity of command and that of direction that the entire members of the academic community are moving towards a common direction.

However, Prof. Shaaya has made sure that subordination of individual interest to the general interest has been the focal point of his adminstrative techniques. What remains?

This answer rests on our able leadership of the present government led by His Excellency, the Executive Governor of Zamfara state, Hon. Dr. Bello Mohammed, MON, (Danmadamin Mafara) to complement the overwhelming efforts made by this great man of integrity, Professor Shaaya Shehu Mafara, (Magajin Rafin Mafara) and members of the academic community of this pioneer institution, in addition to what it has been doing.

Dahiru Samaila Mafara write in from Talata Mafara and is an ex- student of Mass Communication Department of the Polytechnic and can as well be reached at zamanlafiyadadi@gmail.com.