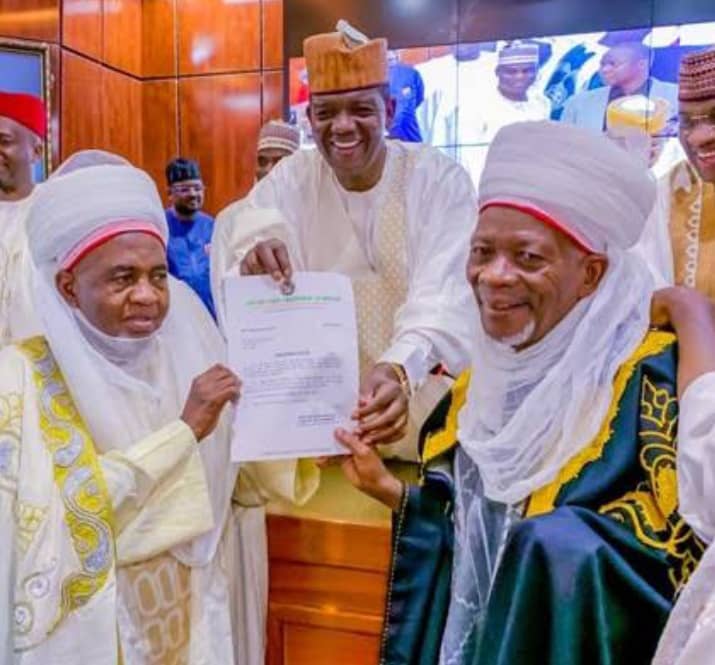 I was shocked by the news of the coronation of the notorious banditry kingpin, Adamu Aleru by the Birnin Yandoto Emirate Council as the Sarkin Fulani of the Emirate on Saturday, 16th July, 2022. It was an unfortunate development. It was a bad Saturday for the majority of the people of Zamfara State.

I personally watched the video clip of the coronation ceremony, monitored by Maibiredi TV which was attended by the Emir of Birnin Yandoto, Alh. Aliyu Marafa and the celebrant, Adamu Aleru, who was accompanied by a large number of his supporters, which held at Yandoton Daji, on Saturday 16th July 2022. I also listened to the speeches made at the occasion, more particularly the ones delivered by the Hon. Chairman of Tsafe Local Government Council and the Hon. Commissioner for Security and Home Affairs, DIG Mamman Tsafe Rtd.
As a concerned citizen of Zamfara State, I was disappointed.

I was also disappointed with our security agents, more particularly the Police who claimed that Aleru has been on their wanted list since 2018 and placed a N5m bounty on his head. He is accused of committing atrocities in Katsina State and beyond.

It is a failure on the part of the Police to fail to arrest him for over 4 years and allow him to continue to move around freely.

Aleru might have played pivotal role during a recent peace process locally arranged between the Birnin Yandoto Emirate and the bandits terrorizing Tsafe LGA. It’s not wrong for the Emirate or any other institution of government to appreciate him for his efforts in some ways, but not by conferring him with a chieftaincy title of Sarkin Fulani.

By the nomenclature of the title, he is the spiritual leader of the Fulani tribe within the boundaries of Birnin Yandoto Emirate, which, in my opinion is highly wrong. The title is too big for a repentant bandit. It should be reserved for the highly respected Fulanis who have demonstrated commitment over the years for peace and human development. People with clean record.

It is not a bad idea to engage the bandits in dialogue who have surrendered their weapons. It is also not a bad idea for the government to reintegrate them into the society, so as to change their mindset.
Government should also have the capacity to arrest, investigate and prosecute those who are not willing to surrender. They should be punished by killing in line with the new Banditry Law of Zamfara State.

In my opinion, the Emirate was hasty in the decision. Remember, the Emirate is barely 2 months old and the Emir is just some weeks old. He should have taken time to study the situation before coming up with this idea. There should be uninterrupted peace for at least 5 years in the Emirate before the Emirate should contemplate the award. Few weeks ago, Mada town was attacked by bandits and displaced several people. Mada town is a stone throw away from Yandoto town.

As far as I am concerned, it’s too early to jubilate peace within that domain.

From the assumption of this government in May 2019, three Emirs and some District Heads have been sacked for alleged culpability in banditry.

Not only traditional leaders, almost every category of people are involved and are compromising the fight against banditry in Zamfara State, including high profile government figures, politicians, security agents, lawyers, judges etc.
At the moment, banditry is the most lucrative and profitable business and the fastest growing enterprise in Nigeria.

A lot of people are making fortunes out of it, that is why it refuses to go.
The government announced the suspension of the Emir on 17th July, 2022 and constituted a committee under the leadership of Hon. Yahaya Gora Namaye to investigate the circumstances leading to the action of the Emir. We are waiting for the outcome of the investigation of the committee which will either indict or absolve the Emir.

It would have been unfair for the government to sack the Emir at this stage. That will amount to the infringement of his fundamental rights of presumption of innocence under Section 36(5) of the Nigeria’s Constitution.

One funny thing about the whole saga was how the government distanced itself from the process. I find it difficult to agree with the government.
My father was a Village Head before he died. I am a holder of 2 traditional titles. I know what it means to confer chieftaincy title on someone. I know the process involved. Logically, one will be appointed first, then coronation follows. They hardly occur on the same date.

It is a great failure and tremendous embarrassment on the part of the government to claim that it was not aware of both the appointment and the coronation.

That apart, some key government functionaries attended the coronation and delivered speeches, including the Hon Commissioner for Security and Home Affairs, DIG Mamman Tsafe Rtd and the Hon. Chairman of Tsafe LGC.

In all honesty, the government was supposed to suspend the duo of DIG Mamman Tsafe and the Hon Chairman of Tsafe Local Government Council respectively in the manner it suspended the Emir, because, to me, they committed the same offense.

On the 20th July, 2022, Zamfara State Government issued a directive that hence forth, any appointment for chieftaincy title by an Emir or Senior District Head or District Head must be approved by the government.

I personally don’t think that measure is sufficient to address the problem. We need a law to streamline the procedure for the appointment of chieftaincy title. The governor does not have to be involved in everything. The approval can be handled at the Local Government level.

Instead of addressing the insecurity itself, government should address the root causes of the insecurity. The poverty and illiteracy level in Zamfara State is too high, government should reduce it to the lowest level. There should be a strategic plan on how to create jobs for the people, provide quality water, accessible roads, drugs, electricity and other basic amenities. There should be plan on how to deal with corruption and address the seeming collapse of justice system. Something needs to be done to strengthen security on our borders. Government should collaborate with the neighboring state governments on border security.

The Community Protection Guards is a good idea but government should show serious political commitment in the project and provide a law to regulate the modus operandi of the outfit otherwise it will be a mere political statement.
May Allah SWT bring an end to the insecurity in Zamfara State, restore our peace, guide our leaders and bless them with focus, determination, honesty, foresight and sincerity to steer the affairs of the state to the dreamland, amin.

Galadi is a former Chairman of the Nigerian Bar Association, Gusau Branch (covering Zamfara State) and President of Bello Galadi Foundation.
He can be reached on:
muhammadbel_law@yahoo.com; muhammadbellaw80@gmail.com and twitter handle: @bello_galadi1

DON’T UNDERESTIMATE WHAT PDP CAN DO AS OPPOSITION PARTY IN ZAMFARA, SHINKAFI WARNS.