The People’s Democratic Party in Zamfara has announced the expulsion of Engr. Ibrahim Shehu Gusau from the party.

This is contained in a letter of expulsion dated 7th January 2023 and signed by Hon. Aliyu Hassan Gusau the PDP Secretary of Mayana ward which has been in circulation on various social media platforms. 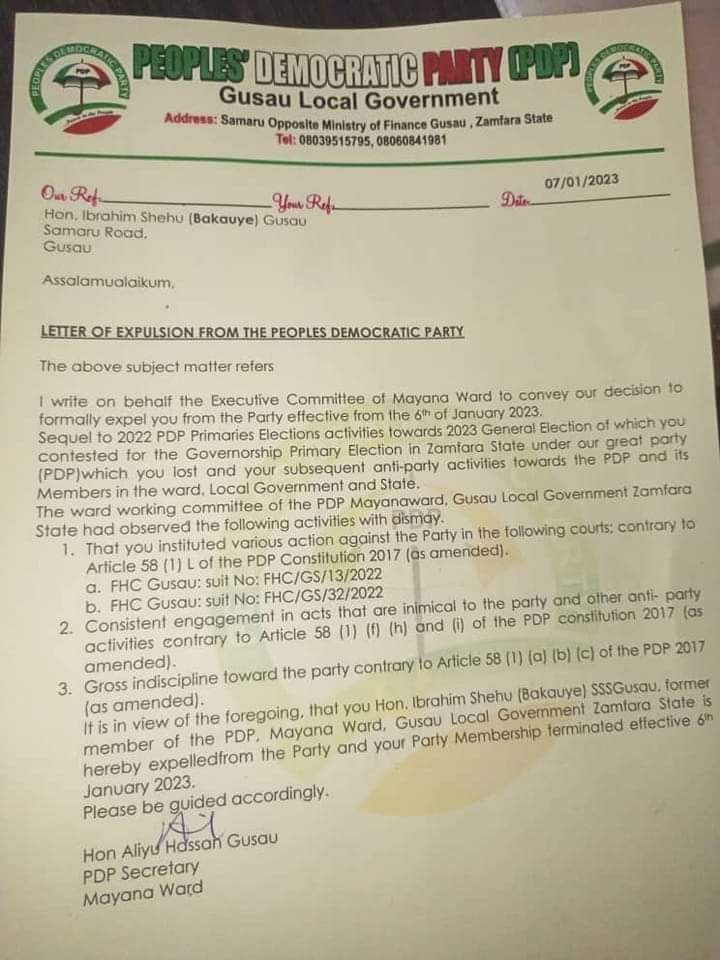 The Secretary noted that the expulsion became necessary on the ground of “Anti Party” activities exhibited by the politician.

The party according to the letter had observed that, Engr. Ibrahim Shehu had instituted various court cases against the party, which is contrary to Article 58(1) of the PDP Constitution 2017 (as amended).

The letter also accused Engr. Ibrahim Shehu of “consistent engagement in acts that are inimical to the party and other anti-party activities contrary to article 58(1) (f), (h) and (1) of the PDP Constitution 2017 (as amended).

The letter also accused him of “gross indiscipline toward the party contrary to article 58(1) (a) (b) (c) of the PDP Constitution 2017 (as amended).

But a source close to Engr. Ibrahim Shehu who spoke on condition of anonymity said, his principal is yet to be served the letter, but they have equally seen the letter trending on the social media.

ABDUCTED STUDENTS OF FGC YAURI: PARENTS CRIES OUT OVER LACK OF COMMUNICATION