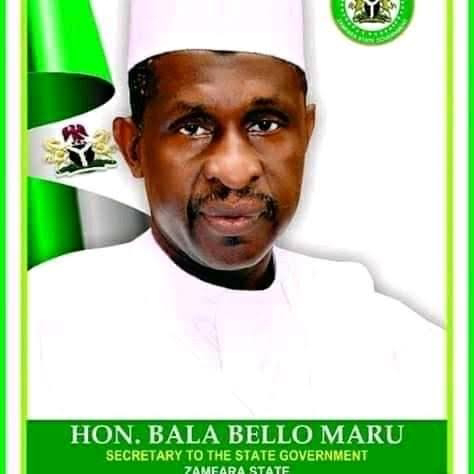 Portrait of Zamfara SSG Bala Bello Maru
Secretary to Zamfara State Government Alh Bala Maru has formally defected from the Accord Party the party he contested for the post of Governorship in 2019 to the ruling PDP.
He said he has defected to the ruling PDP in order to support the Governor better saying, as kindhearted Governor his loyalty to Governor Matawalle should be beyond government affiliation, but politically he has to align with Matawalle ruling party.
Maru said he was impressed with the declaration of the Governor that those who are non PDP members but holding positions should decide their fate by themselves since he is not going to remove them because their principals have drawn another political lines with his government.
He also said, he has defected to the PDP because he wants to contribute to the security management of the state as championed by Governor Bello Matawalle saying his effort in ensuring that the security and safety of the people has significantly improves needed strong complementation.
He noted further it was on record that, the Governor has provided a source of livelihood to over ten thousand people through his ZASIP and YECO programmes noting that hundreds of other people were given political appointments.
He explained that since his appointment as the SSG the Governor used to treat him with esteemed respect and based on that precedent he feels he has no option than to join forces with him and develop the state.
Related Topics: