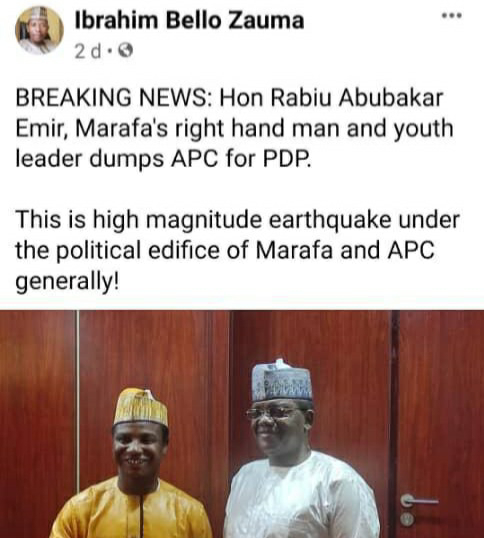 Secreen shot of the story published by Sahara Reporters
Zamfara State government has accused the online news media Sahara Reporters of presenting one of its supporter Rabiu Abubakar AKA Emir as a repentant bandit either intentionally or out of quackery.
In a Press Statement by the Governors Spoke Person Malam Zailani Bappa said, the report by Sahara reporters which carries the picture of Governor Matawalle together with one Rabiu Emir a prominent supporter of Sen. Kabiru Garba Marafa who visited the Governor simply to perfect his defection to PDP is a clear manifest quackery of not having the capacity to authenticate any piece of garbage presented to its editors as news. Either way, it speaks foul of this medium
Bappa further said, “no picture of this event was taken except that of the Director-General on New Media to the Governor which is the picture used by the Sahara Reporters and indeed, by anyone else. Meanwhile, this picture also released with a caption (as in this screenshot) and therefore, in no doubt of its description, identity and purpose”.
“It is therefore, evident that Sahara Reporters presented Hon. Rabiu as a repentant bandit either intentionally out of connived mischief or out of manifest” Bappa added.
Bappa said, Sahara Reporters have done similar questionable presentations against the Zamfara State Government twice in the recent past. This is according to him is increasingly making people lose confidence in the medium.
He also described it as unfortunate that all the false stories published against Zamfara State government by Sahara reporters are disseminated to the public without contacting the government to hear its own version of the story.
Malam Zailani Bappa therefore called on the public to disregard this latest false information and further try to confirm from alternative sources any story they come across regarding Zamfara state Government published by Sahara Reporters
Related Topics: