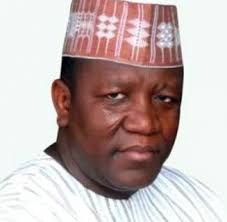 The Former Chairman of the Nigeria’s Governor’s  Forum (NGF) Alh Abdulazeez Yari Abubakar has described the death of PRP leader and former Kaduna State Governor  Alh Balarabe Musa as monumental loss to the entire people of Nigeria.
In a statement by the Zonal Vice Chairman of APC in charge of Zamfara Central Alh Sani Gwamna Mayanchi Abdulazeez Yari said, Nigerians have indeed lost an honest political icon whose political philosophy has continue to shape the quest for transformation of Nigeria through honest and sincere democratic  leadership.
Abdulazeez Yari said, Alh Balarabe Musa died as an active political reformer who was jealous at making Nigeria great through struggle for democracy which is owned and driven by the citizens.
Abdulazeez Yari further noted that, Alh Balarabe Musa died as very courageous and outspoken politician whose eloquent voice would be missed on several trending national issues.
The former NGF leader said at the age of 85 he is convinced that, late Balarabe Musa died as a fulfilled political hero whose contribution to regional and national politics are always visible to the manifestation of a transformed Nigeria.
Former Zamfara Governor Abdulazeez Yari said “on behalf of my humble self, my family, APC Zamfara and indeed all well meaning Nigerians I hereby condole the families of late Alh Balarabe Musa and prayed for God almighty to have mercy on him, grant his soul eternal rest and give his family the fortitude to bear the loss”.
The former Governor also used the opportunity to condole with Governor  Nasiru Elrufai and indeed the entire people of Kaduna State over the demise of late Balarabe Musa, a death he described as shocking.
Related Topics: