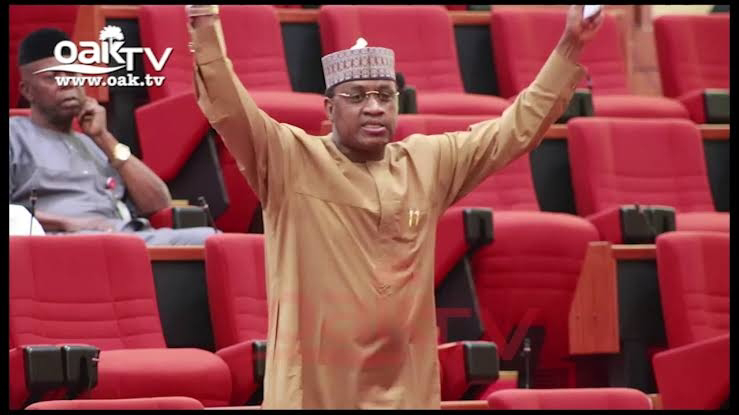 The factional leader of All Progressive Congress in Zamfara State, Senator Kabiru Garba Marafa, has challenged an Islamic group under the leadership of Malam Aminu Aliyu Gusau to raise more of their reservations over his recent comment on how Shariah legal system is being practices in the state insisting that, he will respond to the group at the appropriate time.
The Senator who expressed surprise at the recent development involving some Islamic scholars in the state  said, he has welcomed the idea that, the Islamic group led by Malam Aminu Aliyu has invited other groups to come together jointly to challenge his utterences saying, he is ready to debate the matter with them at the end of the whole drama.
The controversial Senator said, anybody who knows the antecident of Malam Aminu Aliyu and his likes in Zamfara knows fully that, this types of praise singing is what they usually do to earn recognition from the serving government.
He insisted that, he may not respond instantly to their utterences as he awaits to hear more from those other groups that may likely key in to their opinions, insisting that, every living being in Zamfara knows fully that Shariah legal system is not practiced in Zamfara the way it is ordained by Allah.
He called on his social media supporters to restrain themselves from offering any forms of defense on his behalf and allow those Islamic groups mobilized by Aminu Aliyu to voice out whatever feelings they have from the radio interview he granted insisting that, he will defend himself because what he has raised is nothing but the bitter truth.
He connected the recent  calamities befalling Zamfara to the game of deceit being played in the name of Shariah implementation, saying God almighty has promised to allow leadership under the non believers to  last longer if there is justice and fairness but promised to ends leadership even if it is in the hands of believers once it has cordon injustice and lack of fairness.
He described what is going on in Zamfara in the name of Shariah as purely an “act of injustice”.
The Senator insisted that, he has stand by what he has uttered during the radio interview and insisted further that, every citizen of Zamfara is a living witness to the fact that, Zamfara is not  practicing genuine Shariah legal system.
Related Topics: